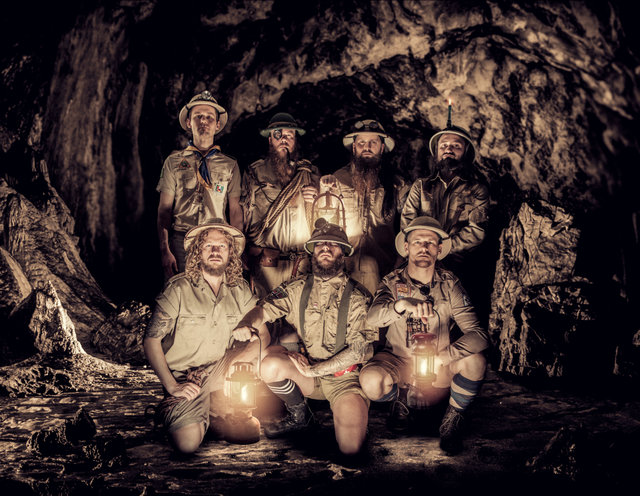 Norwegian Balkan metallers TROLLFEST pleased to announce the release of a new album on February 24th, 2017 via NoiseArt Records.

The seventh studio is entitled “Helluva” and it promises to be a helluva album.
The Trolls once more bring their mix of extreme metal and balkan influences to a new level with an added Brass section, combined with more Kaos!

TROLLFEST states:
"Out of Kaos, into more Kaos!
We have been holding this close to our hearts for some time now, but finally, oh finally, the sweet release is upon us! Our new album is here! To our joy and satisfaction, it will be released February 24th, 2017! We call this beautiful baby HELLUVA, and she is the result of many long months of demoing, arranging, recording, re-recording, cutting, compressing, computing and confusing, laughing and loathing, singing and screaming, spitting and sneering.
The pride we have for this album is unfathomable, and we are so happy to finally share it with all our lovable fans!
Like the perfect omelette, we also busted quite a few eggs (braincells and bloodvessels) during this conception. So even though we still produce a helluva mess in the kitchen, the meals we make are always tasty to the EXTREME! So here we stand at the brink of the coming release, shivering with anticipation, ravenous for road rage and trembling with tenacity! HELLUVA comes with a 100% "Knock-your-socks-off guarantee", that is a promise! LET'S GO!!!"


TROLLFEST have been proving that they are able to hold their liqueur for over 12 years. “Helluva” is helluva party, animated by exceptionally gifted people, and it is not only a lot of fun, but it lives up to the highest musical standards. The vocals that are sung in the band's own “Trollspråk” (“Troll's Language”) are as diverse as TROLLFEST's instrumental madness, and it is just as skillful – elating, catchy, and perfect to babble along even after two, three, or 20 drinks.

Bottoms up, the TROLLFEST is coming nearer, and it demands a high-percentage sacrifice!